Free eBook: I Surrender All: Rebuilding a Marriage Broken by Pornography 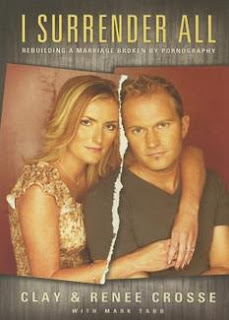 I Surrender All: Rebuilding a Marriage Broken by Pornography  By Clay & Renee Crosse
Are you married? Do you live in the 21st Century? Then, you should read this book, particularly whilst you can download it for free.
Quote from the book:

“I’ve had beautiful, young newlweds as well as women in their seventies come to me in tears telling me that their husbands are hooked on pornography.”

*************
Please note that free ebooks are only free for a limited time, so please make sure BEFORE downloading that the Kindle price still reads $0.00, otherwise you will end up paying for it.
Don’t have a kindle? You can download the Kindle software onto pretty much any device – your PC, Mac, iPhone, iPad, Android device etc.
*************

Contemporary Christian singer Clay Crosse shares his journey as a performer whose 1994 number-one hit, “I Surrender All,” captured the attention of the Christian music scene as he secretly battled a consuming addiction to pornography. Crosse tells how a mysterious throat ailment stopped him cold, causing his financial world to tip precariously, and bringing the realization that the road he was traveling was surely going to end in the demise of his marriage, crushing both his faith and his career. Telling his sobering story, Crosse takes turns with wife, Renee, as they candidly reveal the desperate condition to which their spiritual and marital lives had deteriorated before Crosse acknowledged his addiction. After he confessed that he would have had sex with any woman who offered, Crosse and his wife started a harrowing journey toward building a relationship characterized by trust and accountability. Renee had to struggle to overcome a wide range of feelings, including a sense of inadequacy as a wife, as well as hurt and anger at her husband’s betrayal. Many Christian readers will appreciate the candor of the Crosses’ story, which offers a fragile but persistent message of redemption.