So, what makes a hero for me?

Integrity, first and foremost.  He can make mistakes – in fact, he has to … where can he improve if he starts from perfect?  He will wrestle with issues internally, but in the end his true nature shines through – and it’s a good one! And that integrity must absolutely extend to the woman he loves – his love is true and noble, not driven solely by a physical attraction (though, that should be there too, of course!).
He’s a manly man.  Usually he has a distinguished or dangerous occupation, something that showcases his strength and courage, sets him apart from the other men.  That doesn’t mean he’s a fist-wielding barbarian.  I like him to have a sense of self control and decency!
When he falls for a woman, he makes it known. There’s nothing like a manly man expressing that a woman has stolen his heart.  Now I’m not talking about those emotional men who sprout their feelings at the drop of the hat.  I’m talking about the man who never exposes his heart.  But once his heart has been captured, he is willing to risk rejection and humiliation in order to make his feelings known.
He will do anything for the woman he loves. Nothing speaks love more to a woman that a man who will go past the boundaries of expectation, go outside his own comfort zone in order to please her. And it is usually done without her asking, and without parading the fact around.  After all, he’s done it out of love for her, not with the motive of impressing her.
Confidence without cockiness.  This is a biggy for me.  A real man doesn’t need to boast of his accomplishments, because he’s secure in himself.
Ok, so who are my favourite literary heroes? 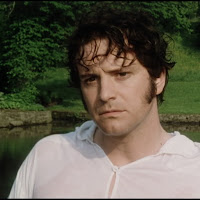 I’ll start with the obvious – Mr Darcy.  Not many will argue with me on this one.  Particularly when he’s played by Colin Firth.  Could there have been anyone any more suited to a role?  My favourite scene is when his sister Georgiana is playing the piano and Elizabeth is helping to turn her pages.  The obvious warmth Mr Darcy feels from seeing Elizabeth with his sister, and from seeing her in general can be seen when he finally reveals a smile.  But I can’t think of this wonderful version of Pride & Prejudice without thinking of my mum’s favourite scene.  I don’t know how many times Jess and I watched it with mum, but mum never fails to kill herself laughing when Mr Darcy runs into Elizabeth unexpectedly at Pemberley after his impromptu swim.  His repeating the question regarding her parents sends her into hysterics.  The uncomfortableness of the encounter is unmistakable! 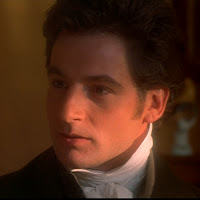 If I go based solely on the books, and leave aside any good looking actor enhancing the hero’s qualities, I am tempted to declare Mr Knightley from “Emma” as my favourite Jane Austen hero over Mr Darcy.  Let’s face it, Darcy is arrogant, and he still looked down on Elizabeth’s family – until he decided he loved her.  (That said, Elizabeth’s feisty temperament is just the antidote and they do make a perfect match.)  Mr Knightley’s kindness and benevolence to those in society beneath him is more open and obvious.  He struggles with his feelings for Emma, endures a period of time when he believes she’s in love with someone else, but in the end he can fight it no longer and declares his feelings.
You’ll have to forgive my lack of range because as you may have heard me mention before, I’ve spent a good decade of my recent life with my head out of books.  I struggle to remember the books I read before my life went into career overdrive, and I’ve only been playing catchups in the literary world in the last few months.
There is one hero I remember reading who I did sit up and notice.  King Richard III.  What? You mean the king who they believed killed his boy nephews in the tower? The one and the same!

I’m referring to King Richard III as portrayed in Sharon Penman’s “The Sunne in Splendour”.  Her account is highly sympathetic of Richard and does an excellent job at weaving a story which provides a plausible explanation for the scandalous events surrounding his reign.  The book really has two heroes – Edward IV, who is Richard’s older brother and precedes him as King, being the other.  Edward is the confident, charismatic hero of the battlefield (and um, the bedroom…), and I certainly didn’t dislike him. But it was Richard’s steadfast devotion to his one true love, Anne, and the lengths to which he went in order to be able to marry her that had me captivated.  And the fact that his motives and intentions were more noble that his brother’s – in love and in kingship – helped raise my opinion of him.

The last one my favourite heroes list (at least, this time around!) is certainly not the least, and it’s the one I’ve discovered most recently.  That is Colonel Cassius McLinn of Laura Frantz’s “The Colonel’s Lady”.  *sigh* … sorry, excuse me for that, I can’t seem to help it when I think of this brooding American civil war colonel.  And I’ve never had a thing for military men.  Or for redheads for that matter! But his strength, his confidence and capability in leading his men send my heart a flutter.  He is certainly the manly-man and any arrogance he has is well placed. He struggles internally with a torturous secret that threatens to sever any possibility of securing his love with the lovely Roxanna.  But his feelings for Roxanna are so real and tender, it positively takes my breath away!

So, there you have it folks – my favourite literary heroes 🙂 Yes I realise that all these characters live quite well in the past, but don’t read too much into that.  I simply don’t read much contemporary fiction.