Keeping Christ in Christmas: Something to Cherish

Good Morning everyone! We’ve got only 6 days until Christmas! Wow how time flies. Life is so busy in the lead up to Christmas. This week is our second last installment of “Keeping Christ in Christmas” by the ACWF of the Hunter.

Today you will be treated with words from Kathlyn, Sandy and John. Enjoy reading Kath’s take on Simeon’s encounter with Christ, Sandy shares her heart for Keeping Christ in our education system and John takes us through current day Bethlehem.

May we all keep remembering to keep Christ where he is always – at the centre.

An Old Man and a Baby

Simeon stood beside his open window looking toward the temple. He held up his hands to the Almighty God, Adonai.
“Lord, you promised I would not die before I saw Your Holy One. It is over 400 years since we returned from exile and still we wait for the comfort of Israel, the Messiah You promised.”
A whole minute slipped by before words came again. “Lord, I’m old and tired but I trust in You and Your promise. Yours is the glory, the honour, dominion and power.”

Pigeons on the ground outside his window cooed and crooned in the stillness that followed.

Warmth infused the old man’s body. An urgent desire to go to the temple griped him. He strode as fast as his aged body allowed him, out the door, down the steps of the pathway, then up the hill toward the temple. He rushed through the courtyard and up the steps, four… eight… ten… two to go. He stopped. Anna was there as usual. Their eyes met. Some time ago Simeon had told Anna that God had promised him he would see the Lord’s Messiah. An understanding passed between the two.
Simeon moved forward, up two more steps and toward the Holy Place. As he did so he noticed a young, very young he thought, mother and baby. A strong, attentive man shepherded the mother and child. Judging by the age of the child, probably almost six week, she’s bringing him for dedication, Simeon thought.
Joy swelled in Simeon’s heart. He thought he would burst. The couple had notice him too. He walked toward them and took the child in his arms. Moved by the Holy Spirit, a song of praise and thanksgiving issued from Simeon’s lips and rent the air. “Lord, now let me die in peace for my eyes have seen the Saviour… ”
The mother of the child looked very surprised as she listened to Simeon’s song. He also prophesied to her about the child’s and her own future. 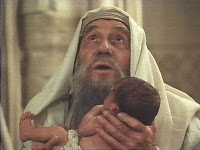 Anna realised Simeon had seen and was holding the Messiah. Quickly, as fast as an eighty-four-year-old woman could, she gathered people to come and see the baby.
******************************
On the 40th day after the birth of Jesus, Mary and Joseph travelled the six kilometres from Bethlehem to Jerusalem to have him dedicated. The law required this. It became a precious memory which she tucked away in her heart and later revealed to Saint Luke (Luke 2:21-40). About 700 years before Jesus was born God promised through Isaiah (7:14) that He, Jesus would be born of a virgin. God also promised that the birth would be in Bethlehem (Micah 5:2).
Why don’t you, right now where you are, ask Messiah Jesus, the King, what He would like you to do for Him in honour of His birth, His death and His bodily resurrection? He did it all for you.

This morning my husband took a Veggie Tales Christmas DVD for the children in his Special Religious Education (SRE) classes to view. The veggie tale demonstrated, in its own inimitable fashion, that Christmas is really a time of giving and making the point in the tale that because God loves us He gave His only Son – born in a manger.
Last evening in our small Bible study group, somehow the discussion got around to how much more likely a Christian comes to believe as a child rather than as an adult. That is not to say it does not happen but a young mind is generally more open and available. Some adults we know do not even want to talk about God. 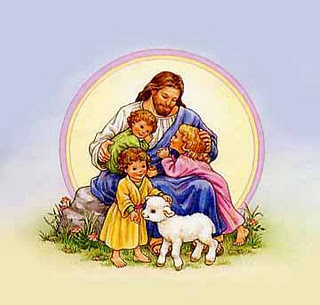 At this time in my life I wish I could give a Christmas present to Jesus of more SRE teachers and SRE-teacher mentors for the primary schools. I have wondered if I should not just take the plunge and sign-up. Yet, after praying about it, looking at my passions, experience and talents I believe that my involvement is in more of a support role.
Obviously for someone to be a SRE teacher, she (or he) must be available a day during the school week. I have talked to a few who say they would like to but know they will be away for a period during the school year. I wonder if being there even 80% of the time would be better than not at all.
Others have said that they find it hard to commit to doing it on their own (I would certainly be in that category as I have nil experience). What if two or even three of these got together and shared the role? This would be a way to give, grow together, mentor a candidate and have Christian fellowship.
Perhaps the response not to pursue because “I have already done my part” is the one that saddens my heart – as I do not believe the Bible ever tells us to stop serving the Lord. Perhaps one who has taught could go along side a novice to mentor and then “release” him or her. Then perhaps move on to the next one?
What about you? Have you thought about it? Have you been burdened by the missed opportunity to reach children for Christ? One way to help to keep Christ in Christmas is to keep Christ in the schools.

COME WITH ME TO BETHLEHEM THIS CHRISTMAS

Come with me as pilgrim or tourist to Bethlehem in the land of the Bible. Though it is caught up in the sovereignty disputes between Palestinians and Israelis Bethlehem remains a special place in the minds of Christians all over the world. Its significance transcends the seemingly intractable disputes over territory.

Our visit is to the Church of the Nativity in Bethlehem, said to be the third oldest Church in the world.

Wayne McLean.
The first thing we notice is the very low doorway at the entrance. Apparently this was to prevent attackers from riding their horses into the building – a reminder of past wars that have plagued the Holy Land.
The Church is large, with columns on either side, and empty of furnishings and seats. The remnants of ancient paintings cover the walls. People are everywhere – pilgrims and tourists alike. Some have come just to look, others have come to pray. We notice that the crowds are moving towards a set of steps leading down under the church. This is the focus of our visit as we have come to see not the spacious building, but what lies under the church.
As we make our way down the steps we find ourselves in two rooms, cave-like in appearance. In the second and smaller of the two, there is a group of pilgrims singing Christmas carols, in a language we can’t recognise, but in tunes that are very familiar. Their joyful singing captures our attention and transforms us from being purely tourists. With warm and open hearts we join in spirit with those pilgrims. “O little town of Bethlehem”……. ‘Away in a manger….”
In a few minutes we find ourselves alone in that cave-room. And then we see the Star. A large silver Star is set in an alcove on the floor, on one side of the room. Engraved on the Star are words in Latin which someone in the room with us translates: ‘Here Jesus Christ was born of the Virgin Mary.”
Suddenly, the truth fills our minds. This Star proclaims that we are in the actual place, or near enough to the that place where God came to earth, born in a stable cave.
We know that no future celebration of Christmas will be the same for us. Santa Claus and Christmas Dinners may be part of the festivities, but we know that, at the heart of all our celebrations, is the greatest truth.
Christmas is Christ, once born in a stable cave in Bethlehem, and now living in our hearts. And our Christmas giving to others is a grateful sign of that wonderful gift of God to us all.