Monday Morning Musings: The Tennis is Over, Time to Get to Work!

January is traditionally a month of downtime in Australia.  Well, it certainly is in our family anyway – and always has been.  I think the heart of this goes back to school days since January is our summer holidays.  After getting through the Christmas/New Year mayhem, January was always the time for relaxing and having fun.  Family holidays by the beach, swimming almost every day at the local pool, spending lots of lazy hours reading.
I think that since we grow up spending our January’s like this, it basically becomes part of our culture.  So that despite I’m not at school now (and haven’t been for some time!) and I don’t even have kids in school yet, I’m still in that holiday mode for most of January.
There are two factors that help cement that holiday mode: the cricket, and the tennis.  It isn’t summer until you hear Richie Benaud introducing the cricket on Channel 9, and Bruce McAvaney’s tennis commentary on Channel 7.  I have fond memories of camping in the lounge room with Jess and our mum and dad, staying up for those Australian Open midnight finishing matches. And I find nothing more relaxing than flaking out on the couch in the heat of the day watching the cricket – which I just LOVE.  That’s actually how I started learning to nap as a teenager (prior to this, I never slept in the day).  The soothing sounds of the cricket, the energy sapping heat and the lulling rythm of the fan became the winning combination for getting my hyper-alert mind to slow down enough for me to relax. 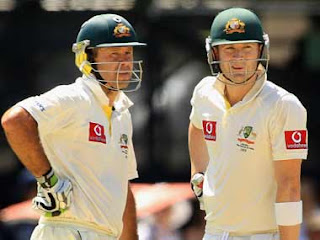 To me, January means hot weather, swimming, lazy days watching the cricket, and late nights watching the tennis.  This particular January hasn’t been all that hot, and I don’t get to swim a lot these days since that’s a hurculean effort to do with two young kids.  But I have definitely been indulging with the sport watching this year. Consequently I haven’t been reading a lot and in general it’s been hard to get movitated to do much.
Well, as of last night, the tennis is over.  I have enjoyed some great matches, the least of not being last night’s ripper final between Djokovic and Nadal.  Yes, I stayed up until 2am to watch the nearly 6 hours match.  I have to confess I almost went to bed in tears to see Nadal lose after fighting so hard to come back. (And I’m sorry, but did Djokovic really have to carry on, ripping his shirt like that? Seriously, what does he think this is?) 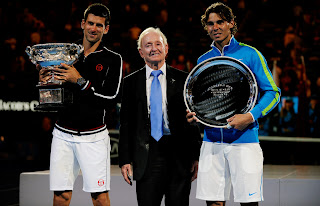 The Aussie cricketers have done us proud again this test series having completely and utterly obliterated the Indians.  What great knocks by Michael Clarke and Ricky Ponting.  God willing one day I will get to watch the tennis at the Aussie Open (I have already seen a semi-final at the Sydney International) and it’s been a few years since I’ve gotten to the cricket, so would love to go again soon.  But it’s all over for this year, so it’s time to get off the couch 🙂

It seems only appropriate then that Australian Day is celebrated on the 26th of Jan, just near the end of tennis season and right before school starts up again.  It’s like the culmination of the summer holiday season and signals the end to the summer fun and resumption of school and work. 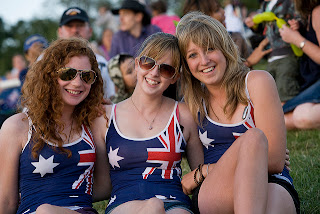 You may have noticed that we haven’t had a feature author for January, and this holiday mode is the reason for that! Rest assured, we have been doing some work, and we have already lined up several authors who are all keen to be featured here at the Book Review Sisters in the coming months.  The first of these authors will be featured in February.

I hope all our Aussie readers have enjoyed January as much as I have, and are rested and ready to charge ahead into the year!