I’m a girl from the country. When I say that don’t start imagining me on a farm riding horses or herding cattle ( I have done both and I didn’t do it well). Instead picture a house in town that’s a short walk from the main street. I love the quiet life of a country town and the big, wide open spaces. I love being able to bump into people you know just about every time you leave the house. 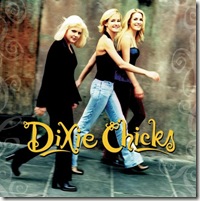 I might not have lived on a farm, but most country people enjoy country music, right? I did not. Too much exposure to bad country music left a bitter taste in my mouth. That was until I was 16 when my good friend Ellie put on the Dixie Chicks and I was hooked! I give her total credit for my love of country music which is now more than 10 years in the making. Helen still believes it’s a “phase” 🙂
Now you’re probably thinking that I will be talking to you about Australian Country Music, which has it’s own strong market and flavour down under. Whilst I enjoy some Aussie Country Music, I have to tell you that I’m not very patriotic about Aussie country music. You might as well label me American when it comes to my love of country music. Ellie proceeded to introduce me to Garth Brooks, Tim McGraw, Faith Hill, Kenny Chesney, Lady Antebellum and a whole host of others.
I can never really explain what I love about it. Country music tells the best stories, is usually family friendly music, has both fast tunes and great ballads. For whatever reason it just resonates with me.
The Dixie Chicks have been to Australia at least twice and I couldn’t go to either concert. I’m bummed about that, as now I doubt they’ll be touring again, let alone coming down here.
So when Tim McGraw announced that he was doing a tour in 2010, I jumped at the chance. When I found out that he was coming to Australia, I was about 36 weeks pregnant. I was on the computer and my husband was in the shower. When  I saw the announcement I started squealing, “Oh my gosh! I have to go! I have to go!” over and over. My poor hubby ran so fast out of shower dripping wet with his towel going “What we need to go to the hospital?” his voice panicked.
I looked at him like he was crazy. “No! Tim McGraw is coming to Australia!” He snorted, rolled his eyes and walked off. I did get to see Tim in concert and it was awesome! 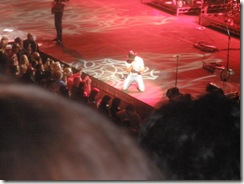 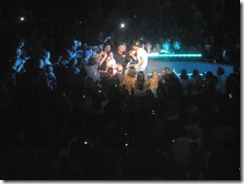 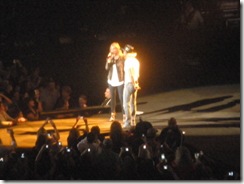 Some of my pictures of the concert.
This year I get to see not just Tim again but his wife Faith Hill, when they tour Australia in March! So I’m very excited about this!
I suppose you want to know the reason for this post? I just bought Tim’s new album, Emotional Traffic and it got me thinking about the up coming concert and why I love the music! Thanks Ellie for introducing me country music!
I’d love to know your favourite music genre and why? 🙂