So I’ve been waiting and waiting for months to head out to The Hunter Valley and see Tim McGraw and Faith Hill plus a whole host of other artists playing at CMC Rocks the Hunter 2012. Now this event is a 3 day one, but since I hate camping and am the mother of a 21 month being there for 3 days was never going to happen. I was totally OK with that by the way. I bought tickets for the final day with Tim and Faith being the headlining acts of the whole event.

The day was either always hot, cloudy and spitting down rain (sometimes all three at once!). My best friend (who doesn’t really like country music but does like Faith Hill) came with me in lieu of my other friend who does love country but could no longer make it. So we tramped through the mud that I nearly got the car  bogged in and dragged our tarp and picnic blanket to a nice spot not too far from the stage.

So the music began and well to be honest nothing special happened until much later in the afternoon. Being my first festival I now know to arrive half way through the day. The music is better and there are still good spots to sit. The things we learn on first outings!

By the time Tim and Faith went on stage we were more than ready. And I must say they did not disappoint! The picture below shows them on stage together. In the end it was a long trip home filled with mud and rain and we were exhausted but it was a great show and I’d go again next year! 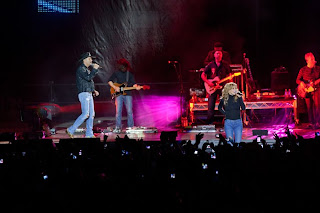