Look away now if for some reason you’re not up to date with Downton Abbey.  For our non-Australian readers – please bear with me, as I realise the episode I’m about to discuss is one that you saw a million years ago.
Last Sunday we saw Episode 7 of Season 2.  Which to my great dismay, I’ve just discovered is the second last episode of the season (although there is still the Christmas Special).
Anyway.  The drama is escalating!  I was glad to have seen Thomas duped – although oddly, I felt a teensy bit sorry for him. But just a teeny tiny bit.
Sybil … dear Sybil … I know the guy is cute and all, and I suppose it had to happen … but you know, if the guy isn’t even trying to put your best interests first (like, calmly trying to discuss the situation with your parents, or maybe NOT risking giving up the life you’ve always lived), then it isn’t going to end well.  Do I hear boo-ing?? Am I not romantic enough? Probably not! My life has taught me to be sensible 🙂 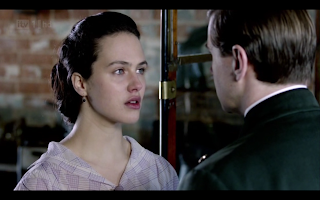 Should Matthew follow his heart? Would he be justified in ditching the nice-but-boring Lavinia?
I know Mary isn’t the most likeable character at times, but I have to hand it to her.  My favourite line from the night was “Aren’t all of us stuck with the choices we make?”  I think she is going to find she isn’t as tough as she thinks she is.
My other favourite line from the episode, goes to Dowager Countess Violet: “All this unbridled joy has given me quite an appetite.”
The most scandalous moment of the episode goes to the least scandalous person of the whole show.  Does anyone else have a huge problem believing that Lord Grantham would so easily kiss the house maid?  I know they’ve had a couple of nice chats … and that Cora has been a little unavailable … but is he likely to act so desperate already?  It doesn’t seem in character. 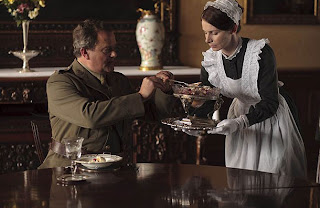 All my misgivings aside, I’ve been enjoying this season immensely, and I’m going to be devastated when it’s over for another year!
Have you been watching Downton Abbey? I’d love to hear your thoughts 🙂