Book Review: Safe in His Arms by Colleen Coble 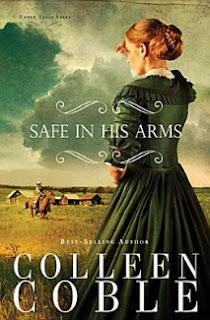 Safe in His Arms by Colleen Coble
Thomas Nelson, January 29, 2013

Born and raised on sprawling Texas land, Margaret O’Brien prides herself on her competence as a rancher. But her father believes she’s made for more than just dawn-to-dusk work. He wants her to have the love of a good man, to raise children, to build a life. But Margaret gave up such dreams years ago. She’s convinced no man would have her, that the ranch is her life now.

So when Margaret’s father hires Daniel Cutler as a new foreman, she’s frustrated and suspicious. Then an overheard conversation links him with a gang of bank robbers, and she’s downright worried. Daniel swears he’s not involved, but Margaret’s not convinced. She knows the man still has secrets. But would a criminal be so kind and talk so convincingly of his faith? As a series of tragic “accidents” threatens all she holds dear, Margaret must decide what to trust: her own ears, her best judgment . . . or what her heart keeps telling her.

Colleen Coble’s latest book really grabbed me and kept me enthralled from beginning to end. Not just with the storyline but with the depth of the characters presented and the way God moved through this book. Margaret is a woman who feels out of place in the world, not quite sure if her father really loves her for who she is, if she’ll ever fit in with the women around her and does she really want to? Will someone ever love her for her, not for her father’s land and money and does she want to be loved for her? Through the course of the book, Margaret finds these answers.

Daniel Cutler, the new foreman with a shady past and possibly still shady future, captures Margaret’s attention and eventually heart – but it takes a while! Daniel’s words of love, encouragement and his direct manner with Margaret regarding her relationships with family, friends and God slowly show her where her worth lies – not with him or anyone but with God.

One of my biggest gripes with Christian fiction is that characters seem to only need to learn a lesson once before they get it. In this book Margaret had to learn it several times before she finally grasped what God was trying to teach her. It was infuriating a little but that’s wonderful and true to the human condition. Which is why I loved this book so much, Margaret’s journey felt real.

It was a rollicking adventure at the same time and I didn’t know how it was going to end or just who the bad guys were. So this for me is a winning combination – action, drama, romance and a spiritual element that had a natural progression – one step forward, two steps back – but isn’t it good that God is walking with us step by step both forward and back!

Thank you to NetGalley for a copy of this novel for review.  I was in no way obliged to give a positive
review.

Jess’ favourite genre is contemporary women’s fiction and contemporary romance fiction. She also enjoys historical fiction with a focus on romance. She loves books set in country towns or farms with a cowboy featured in either historical or contemporary settings.

She is currently writing her first novel, a contemporary women’s fiction/romance set in a small country town.