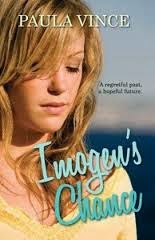 Imogen’s Chance by Paula Vince
Even Before Publishing, April 1st, 2014

Imogen Browne longs to make up for past mistakes before she can move on. She quietly resolves to help the Dorazio family, whose lives she accidentally upset. Her biggest challenge is Asher, the one person who may never forgive her. And he is facing a crisis of his own. Imogen must tread very carefully, as trying to fix things may well make them shatter. A sensitive story about misplaced loyalty, celebrating life and falling in love. Can family secrets concealed with the best intentions bear the light of day?

This is a thoughtful book, in which relationships are not simple. People are not simple, so this means there are secrets, lies and guilt surrounding people. This is the case in this story. Almost all of the characters have something they are atoning for. None more so than Imogen and Asher – the leads in this story.

Paula Vince handles the subject matter well and as a reader I enjoyed watching the relationship between Imogen and Asher evolve and the really nice thing was, neither character saw it coming. Watching them navigate their way through their feelings was sweet and even when their secrets are revealed and almost all seems lost, they prevail.

A couple of things gave me a little trouble in the book. A few scenes were a little crowded with characters. I couldn’t tell who was who at one point early in the book, but that was fairly brief. The second thing that troubled me, was the spiritual conversation. When I say that I’m not saying I didn’t want spiritual talk in the book. This is a Christian novel and one expects that it be there. What troubled me was that for me the conversation dragged the story a bit. I found it to be a little on the theological side, which distracted me from the story. Some readers might find this the case, but others might not notice it.

Overall Imogen and Asher stand out easily in this story of hope, faith and healing. I liked them and really enjoyed watching their budding romance unfold and prevail.