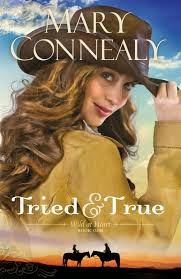 Saddle up for a wildly fun ride with the Wilde sisters!
Kylie Wilde is the youngest sister–and the most civilized. Her older sisters might be happy dressing in trousers and posing as men, but Kylie has grown her hair long and wears skirts every chance she gets. It’s a risk–they are homesteading using the special exemptions they earned serving in the Civil War as “boys”–but Kylie plans to make the most of the years before she can sell her property and return to the luxuries of life back East.

Local land agent Aaron Masterson is fascinated with Kylie from the moment her long hair falls from her cap. But now that he knows her secret, can he in good conscience defraud the U.S. government? And when someone tries to force Kylie off her land, does he have any hope of convincing her that marrying him and settling on the frontier is the better option for her future?

Again, Mary’s book arrive when I need them. Our whole house was down with the flu and finally after a few days, I was able to read and Tried and True arrived – what a perfect way to keep the sick blues at bay. The first thing I thought of not long after starting this book was that it reminded me of Mary’s Sophie’s Daughter’s Series – different from it, but similar. I am now in the process of rereading Mary’s collection of books: Lassoed in Texas Trilogy, Montana Marriages Trilogy and Sophie’s Daughter’s Trilogy – Tried and True inspired me to revisit those characters.

So Tried and True is a lovely book, funny with genuine moments. Kylie and Aaron both fought in the Civil War and those memories haunt them and drive their decisions. I liked Kylie, I liked how she simply embraced being a woman and actually enjoyed it. It was refreshing to read a story, where someone enjoys being what they were created as. She’s got the spunk to go along with it too. Aaron was a solid hero, able yet also a man who has made mistakes and is paying for them. These two made a strong couple.

The story played out well and I thought was well paced. I enjoyed meeting Kylie’s sisters and I’m really looking forward to the rest of the books when we see how Baily and Shannon fair in the love stakes!